Twice now, I have gone to the Brooklyn Museum to see Zanele Muholi’s portrait, video, and installation exhibit, Isibonelo/Evidence.  Muholi’s portraits of South African lesbians occupy one long wall of the gallery.   In the photographs, the women look straight at the camera with the full force of their individual strength and identities.  As portraits unto themselves, the work is captivating.  The photographs are displayed close together and en mass, stretching across three long, tight rows that extend almost the full length of the gallery.  They are sharp and arresting: compelling as portraiture even without their context.

But Muholi’s work derives further impact from its context, and the exhibit is as much installation as portrait gallery.  Isibonelo/Evidence evolved as a form of response to the dire and mounting instances of rape, murder and violence against lesbian women in South Africa.   Flanking the portrait wall in the Brooklyn Museum are two chalkboard panels: one with the daunting facts of violence laid out in the disturbing, orderly neatness of a timeline.  In it, Muholi records incidents of violence against South African lesbians.

On the opposite panel, handwritten messages chronicle women’s experiences of rape, beatings, and murder, the threats they face and fear they live with.  They talk about the practice of ‘corrective rape’ – based on the horrifying notion that through rape men can ‘cure’ lesbians of their sexual identity.  It’s a devastating thought, the very mention of which feels like a physical gut-punch.

In response to this violence that surrounds them, the portraits become actualized: they are in themselves radical acts of self-definition and defiance.  The women Muholi photographs look right at us. It is a challenge for action and compassion.  And it is undoubtedly also an act of courage.  By sitting for their portraits, the women have revealed their lesbian identity to an audience that may include the very men who perpetrate this astounding violence. 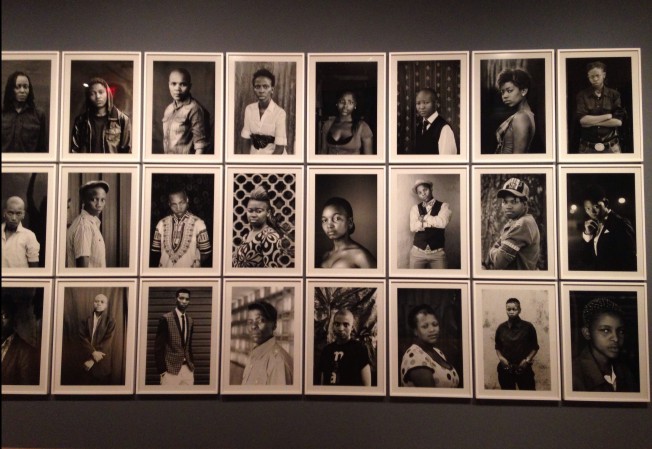 Muholi’s portrait project is art and it is beyond art.  It is action.  It is advocacy and protest and self-identification in its profoundest sense.

The Brooklyn Museum has a particular commitment to exhibiting art that engages with contemporary injustice.  And leaving Muholi’s exhibit, I thought about how the experience of seeing her work, and Kehinde Wiley‘s before it, feels qualitatively different from the experience of reading a newspaper, which often leaves me with a feeling of hands-thrown-up hopelessness.  Here though, I felt humbled and dazed and spent and also engaged.  I didn’t feel the hopeless resignation sparked by even some of the best journalism.  Instead I felt a heightened sense of empathy and activism in the face of pain.

There are still two more weeks to see Isibonelo/Evidence, and I highly recommend it.  The exhibit will be on view at the Brooklyn Museum through November 8.