A few months back, I saw Victoria Vox in concert at the Garrett Jacobs Mansion.  (Have you all been to a concert there?  It’s one of my favorite spaces — and scandals — in Baltimore.)  Victoria has a great energy on stage — she’s open and dynamic and fun to watch.  And her music, played on instruments spanning from ukulele to mouth trumpet, reveals a lyricism, playfulness, and musical breadth.   This summer, Victoria and I had a chance to get together and talk more about her album — and the two years of creative risks that led to it.

Victoria’s album Key started in the wake of a breakup.  After spending Christmas with her family in Wisconsin, she came home alone to her new house in Baltimore.  “It was kind of like that opening scene from Bridget Jones’s Diary,” Victoria says.  “You know… she’s just a mess, tissues everywhere.”  That January 8th Victoria just lay in bed and sang Randy Newman’s “I Think It’s Going to Rain Today” all morning.  “Then finally I’m like, ‘Get up.  Do something today,'” Vox says.  “Even if it’s just learning that song, because it’s a really great song.'”  She started working out the melody on the ukulele.  By the end of the day she’d decided to record the song and post it on YouTube — and to turn that first January recording into a year-long creative project.

You can still find the video of that Newman cover recording on Victoria’s channel: in it, she’s wearing a red and black flannel shirt, the sleeves cuffed, her fingers laced beneath the fretboard of her ukulele.  In the background, you can see the nighttime darkness through her house’s stained glass window.  “I decided,” she says at the beginning of the video, and then looks to the side and purses her lips,”that I would extend that learning to other songs this year: that I will post one song a week.”  The announcement marked the start of a year-long project and an artistic shift. 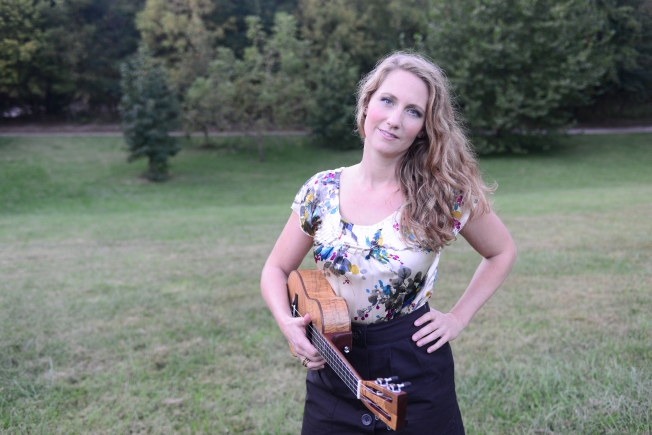 By the time she recorded that first Randy Newman cover song, Victoria had been playing ukulele for nine years and had already released several successful recordings.  Her album Exact Change alone had raised $22,000 in crowdfunding, and she had an extensive and loyal fan following.  But she wanted to push herself in a new direction.  And her cover song project represented a new kind of exploration.  “This was my chance to really study other songwriters’ work,” she says.

Every week for an entire year, Vox learned and recorded a different song by a wide range of artists she admired.  Thousands of existing fans and new listeners followed her weekly video recordings, and by October, this growing fan base started to worry.  “People started e-mailing in and saying, ‘We’re really going to miss this weekly project,'” she says.  They asked her what she was going to do in January, when the cover song year was over.

As soon as they asked, she knew what she wanted to do.

“That year was about gathering all this information,” Victoria says.  “And toward the end — even halfway through, I was getting this itch, like I want to write something.  And I just had to keep reminding myself: you’re gathering musical information right now, and you’re at school.”

But as the new year approached, she knew she wanted to mirror the structure of her 52-week cover song project: that she wanted to write and record a new original song every week that next year.  It was an ambitious goal and, she says, “It was a really scary thing to announce.  I thought about it for over a month, …weighed the pros and cons of that kind of project, of that kind of dedication.”

In the end, she decided to take the risk.  But to make it happen, she needed some support.  She’d learned and recorded 52 cover songs while maintaining a full-time tour.  By the end of the cover song year she was so sick it was hard to sing.  In her videos from weeks 50 and 51 you can hear her getting progressively sicker.  She knew there was no way she could maintain her tour schedule while writing a song each week.  She needed to raise funding to support this new project.

After an unsuccessful self-designed subscription program failed to generate sufficient resources to fund the project, Vox landed on Kickstarter and hit 80% of her goal the first day.  Eventually she wound up raising $22,000, the same amount she’d raised for her previous album — and enough to make the project financially sustainable.

“I was almost brimming with ideas by the end of the year,” Victoria says.  “I was like, ‘Just wait.  Just wait till January 1st.  Just wait until the project is funded.’  It felt like everything was going to outpour.”  And she proved to be right: The information and material she’d studied all year sparked a creative burst in her songwriting.

“It was a lot of work, but it was a different kind of work,” Vox says.  “I was living life a little bit more.  I called it my ‘yes’ year.  Someone would say, ‘Hey, do you want to go to something?’ and I’d be like, ‘Yeah, I’ll go.’  Because you never know what’s going to inspire you, or what you’re going to see, or who you might meet.  For filling my creative well, I really needed to go out and experience things.”

The resulting 52 songs were recorded and immediately released to Vox’s Kickstarter subscribers each week as she wrote them.  They have since gone on to comprise her album Key and 4 songs on a new album,When the Night Unravels, which is slated to be released in January 2015.  “It was a very emotional year,” Victoria says of the intensive year of songwriting.  “I was giving myself complete creative freedom.”

For more on Victoria Vox, including her upcoming performances and her albums, visit victoriavox.com.