I grew up near New York City and spent tons of time there when I was a kid.  But since we moved to Maryland, my husband and I had only been back once.  This year we decided to make a weekend trip up to the city to fix that.  We went in early January and lucked out with a beautiful, temperate weekend.

For this trip, we decided not to repeat anything we used to do when we lived in the area.  Instead, we stayed at a hotel on the Upper West Side.  We arrived in the early evening on a Friday, and it just so happened that the Neue Gallery is open late on the first Fridays of the month.  So we walked across Central Park, following a route we’d never taken before, strolling past the joggers and the lake.

The Neue Gallery is new since we lived nearby, so we’d never been there.  It’s famous mostly for its Gustav Klimt, Adele Bloch-Bauer I, and for its exquisite cafe.  We were impressed with both.  I believe there are certain works of art where it really makes a difference to see them in person.  (Though I love both, seeing Georgia O’Keefe’s paintings or the Mona Lisa in person didn’t drastically change the way I understand the work.)  But this Klimt was revolutionized when I saw it in person: it was an entirely new painting.  I was mesmerized.

(If you’re planning to head up to see it, consider checking out the Rape of Europa documentary, which discusses the complex legal and ethical controversy surrounding its ownership.)

The rest of the gallery contains an admirable collection — and from what I’ve seen and heard, thoughtful and thought-provoking temporary exhibits.  But I had trouble tearing myself away from Adele Bloch-Bauer.  This has happened to me a handful of times in my life.  I wind up spending my entire visit to a museum staring at just one painting.  I feel like I cannot take it all in.  When I try to move away, I feel it behind me like a dynamic, living presence, engaging me back.

When the Gallery closed for the evening we waited in the long line for the cafe, which was as incredible as its reputation (and the constant line) suggests.  So pretty… and such exceptional coffee.  The best I’ve had on the East Coast.  (Though to be fair, I’m not usually a coffee drinker, so there may be equally great places I haven’t tried.  But as pretty as Cafe Sabarsky?  Probably not.) 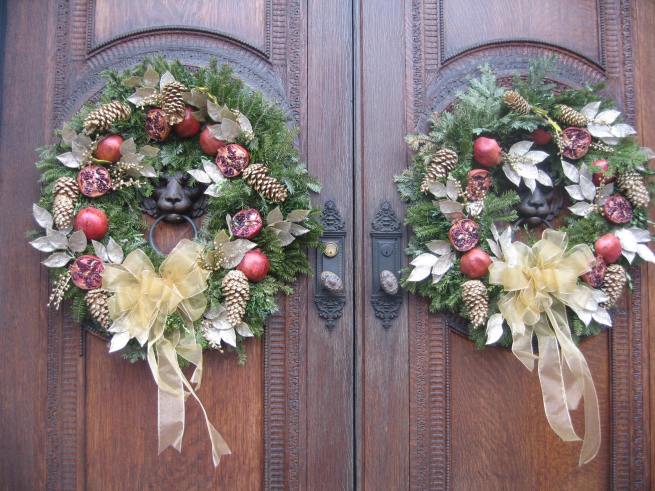 The night was so beautiful that we decided to walk down to see the tree (a minor violation of our decision not to repeat anything we’d done before — but worthwhile if just for the long walk down along the east side of the park).  We also went on a surprisingly difficult quest to find the burger joint at the Le Parker Meridien Hotel (we walked up and down the same few blocks at least three times before we found it).  It wasn’t mind-blowing, but it was a solid burger, an awesome price for Manhattan, and a cool experience at a funky, unmarked, hidden spot.

After a subway ride back uptown, we ducked into Smoke on Broadway just in time for the late night jazz set.  I don’t have words for how much I love this place.  So much so that we went back again the next night AND made a second weekend trip to New York just for the purpose of checking out the late show at Smoke.  And to eat at Pisticci, which has stellar Italian food.  We fell in love with Pisticci at dinner on Saturday night and made a special point of squeezing in an early dinner there before our bus left for Baltimore on Sunday.

We spent a lot of time just wandering through Central Park during the remainder of our weekend, and we also had a chance to finally visit the renovated Greek and Roman Galleries at the Met (another project that hadn’t been finished when we moved away).  The renovations really are lovely: so open and expansive.  I especially loved some of the statues and the incredible re-assembled Roman room.  It’s just gorgeous.  Bright and ornate, and what a testament to art restoration.